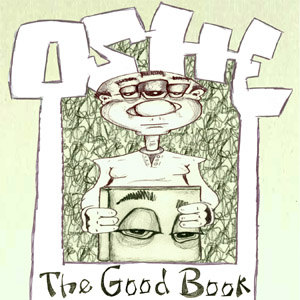 I'm not sure if this New York-based band named themselves after the Yoruba god of thunder and lightning or the federal government's Office of Safety, Health, and Environment. I am sure, however, of the fact that both would be oddly appropriate.

You see, this instrumental quartet is both full of thunder and lightning as well as a threat to your safety and health. Let me explain.

The bass-heavy rhythms rumble and grumble, teased and tormented by trancelike keyboards, and held together by a stunning old school jazz sensibility. It is a backlit thunderstorm of music, the kind where the sky turns that odd shade of electric green, the kind that frightens and intrigues you.

Also, like the lightning the storm produces, it's a threat to your health too. One, it will make you get up and move and exert yourself. Hell, I'm dancing now. Ever try and type while dancing? Not for the meek I assure you.

Secondly it will trash your equilibrium. Channeling Miles Davis, David Gilmour and the more modern sounds of house electronic music, it spins, whirls, twirls and melts all around you, dripping up the walls, through the windows, under the floor, and over the ceiling. Try typing when the letters start melting. I dare you.

Thirdly, Oshe's The Good Book will impress you so much, you'll go into Beatlemania mode. You will start screaming at the top of your lungs for no reason, fluttering your hands and crying. You'll be so overwhelmed that eventually you will collapse in a faint. Can you type when you're unconscious? I thought not.

So there you have it. Oshe, The God Of Thunder and Health Hazards has arrived. They will amaze, frighten and over joy you. They will also make it extremely difficult to type but don't pay any attention to that. Just stand on your head, chew some gum to balance the air pressure, close your eyes and crank The Good Book. It doesn't get much better than that. 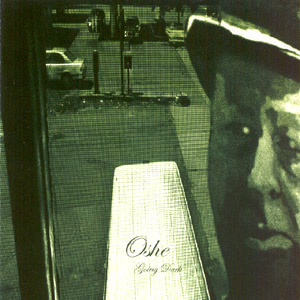 The album, entitled "Going Dark", has five tracks, and measures in at Fifty-six minutes. Each track is true to the title - dark and raw; it is truly honest to Oshe's trademark performances. Though four of the five tracks are over ten minutes in length, the improvisational sections are there not to fill time. Every note that is played is played with purpose. Though each member's virtuosic command of their instrument is obvious, more obvious is the heart and soul that each member puts into each one of these tracks, and more importantly what each member puts into a live performance. They take nothing for granted and leave it all out on the table. Always. Oshe is an ensemble playing at its purest with melodicism, emotion and spirituality always as the goal.

"Instrumental improv-influenced jazz rock fusion that really, really smokes. Recorded as a trio (Fender Rhodes/keys, bass, drums/percussion), the band has since added a guitarist to the mix, leading me to believe that they must be even more nuts now. Any Medeski Martin and Wood fan will find Oshe to be sick on a jaw-dropping level...If you are into progressive rock with a jazz lean, this CD will make your week."
- Todd Russell & Erik Charles, Binghamton's Overground Magazine

"Jake Savage, on Fender Rhodes and keyboards, lays down delicious chords and melodies with sounds that call to mind some of the sparser moments of Herbie Hancocks's work with Miles Davis in the early '70s. Adam Ochshorn on the drums and Ken B. Love on the bass lock down some pretty tight grooves, too, building an ever-mutating playground of rhythm and sound... As an album, Going Dark is mellow, chill-out, groove instrumental music. It's high-quality..."
- Colin Clary, Burlington's Seven Days Magazine

"To me, a lot of these current groove ensembles sound like they've been awake too long. Improvisational Downstate groove darling Oshe sounds like it is still dreaming. The band's easy, laid-back groove is based on liberal variations of relatively complex, mesmerizing themes and hooks. More air, soul, and daylight breathe through their music than you'd expect..."
- Frank De Blase, Rochester's City Magazine

Not too big, not too small, this sticker
is perfect for any place.

And, as always Oshe merchandise means QUALITY!
This 5.5 inch x 2.13 inch VINYL sticker with PERMANENT adhesive is rated up to 5 YEARS outdoors! 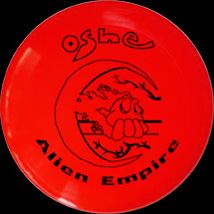 Our Oshe ultimate team frisbee is the REAL deal!!

From the production line of Discraft™, world reknown for their regulation Ultra-Star. The Oshe ultimate team disc weighs in at 175 grams and is streamlined to perfection!